Tarbat Discovery Centre has a repository of physical and on-line resources for you to study, graveyard records, information on the Picts, local history and more.

The Archaeology of the Fortriu
‍
The most cited and perhaps most powerful Pictish kingdom appears to have been the Kingdom of Fortriu. Fortriu was originally thought to be based in Perthshire in central Scotland, but recent work by leading Pictish historian Alex Woolf (2006) has turned the knowledge of the political organisation of the Picts on its head with the identification of Fortriu, with the Moray Firth area, suggesting that the early peoples of northern Scotland were major players in the emergence of the first kingdoms in the first millennium AD.

'The Archaeology of Fortriu' project at the University of Aberdeen was launched in October 2012 as a four year programme of fieldwork that targets the rich archaeological resource that the Picts and the Kingdom of Fortriu left behind, as well as developing a fuller understanding of the long-term evolution of the Tarbat peninsula itself. The project involves a partnership with the Tarbat Discovery Centre. As you will see from the website and visiting the centre, the centre displays the finds of the largest research excavation ever conducted on an ancient Pictish site 'the Pictish monastery at Portmahomack.'

The site at Portmahmomack appears to have been one of the major early churches of the Kingdom of Fortriu. The church represents one of Britain's earliest dated Christian sites and was a vibrant centre before its destruction in the period 780 - 830 AD. In later times the church of St Colman's became the parish church for the area.
The ' Archaeology of Fortriu' project will continue to research the wider peninsula aiming to set the development of the monastery in a wider context. On the peninsula itself the work will target the setting of some of the iconic Pictish stones found on the peninsula through geophysical survey and we will try to more fully understand the emergence of the monastery itself through examining the development of earlier power centres on the peninsula.

To date the work has surveyed and excavated a number of hillforts on Tarbat and the survey of the location of a number of Pictish stones has just commenced. This section of the website will be updated over the coming years with results, news and images of the work. We are also working with the centre to continue to develop and make accessible the rich heritage resources the centre provides on the Picts and local history.

The Tarbat Discovery Programme
‍
The Tarbat Discovery Programme is the largest research excavation ever conducted on an ancient Pictish site. Excavations took place between 1995 - 2006 and uncovered the remains of a remarkable Pictish monastery.
Dating from the 6th to 9th century AD, Portmahomack is one of the earliest Christian sites to be revealed in Britain and the first in the land of the Picts. The monastery was destroyed sometime in the late 8th or early 9th century AD by the Vikings. It was then lost to history before being uncovered by Professor Martin Carver of York University and his team. Unique stone sculpture was uncovered in the excavations that marked out the boundaries of the monastic estate - examples of which can be seen in the Tarbat Discovery Centre and in the wider Tarbat area.

The full story of the Tarbat Discovery Programme is on display at the centre.

See The Northern Picts Project for further details. The project has been supported by a major donation to the University of Aberdeen Development Trust (http://www.abdn.ac.uk/giving/about/)

The project also works with the Universities North Theme project 'Pathways to Power: Rise of the Early Medieval Kingdoms of the North' http://www.abdn.ac.uk/the-north/research/pathways-to-power/.

THE PICTISH TRAIL – WHO WERE THE PICTS?

The Picts were made up of tribes who spoke a Celtic language and lived in eastern Scotland during the 3rd to 9th centuries. They are believed to be descended from native peoples of Scotland. The Picts had a prehistoric religion and were later converted to Christianity. Named the Picti (Painted People) by the Romans, we do not know what the Picts called themselves!

Our site stands on the Tarbat peninsula. 'Tarbat' comes from the Gaelic word tairbeart, 'carry across', used to indicate a place where boats are taken across land. Richly ornamented Pictish cross-slabs stood at the edges of the peninsula, at Hilton of Cadboll, Shandwick and Nigg and their remains can be seen at the places marked on the map above. It is likely that these stones marked the edges of the monastic estate centred here at Portmahomack.

Together these cross-slabs are among the finest artistic achievements of 8th century Europe. Follow the Pictish Trail signs, see the stones and then find all about the Picts at the Tarbat Discovery Centre. 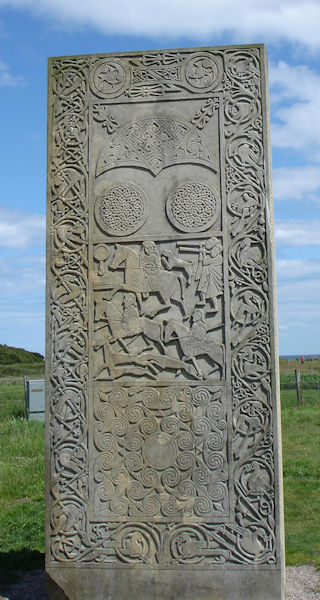 The original stone is in the National Museum in Edinburgh, but we have a magnificent replica which was carved by local sculptor Barry Grove adjacent to the original site. This means that you can see the stone as the local population would have seen it over 800 years ago.

Drive down to Balintore, follow the coast road and travel north for about ½ a mile and you can see the original base of the stone at the Seaboard Memorial Hall.

Continue on north through the small village of Hilton-of-Cadboll as far as you can go. Follow the signs and you can visit our magnificent replica at the site of the medieval chapel. 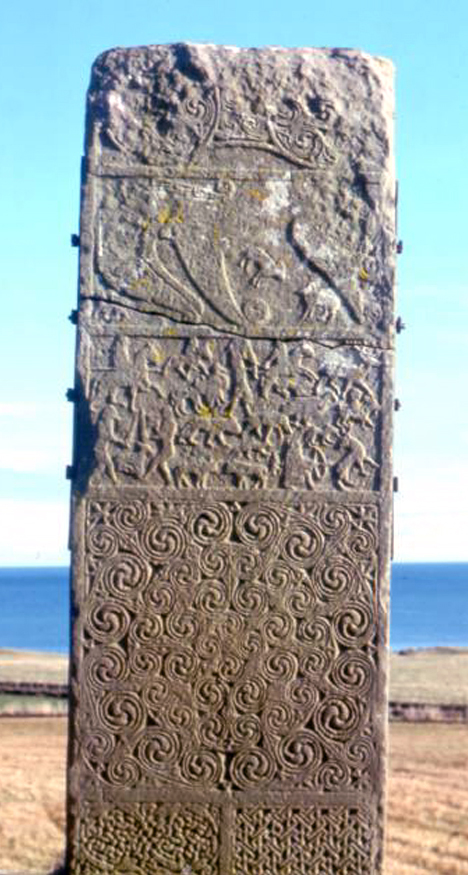 Clach a’Charridh (The Shandwick Stone) means ‘Stone of the Grave Plots’ and was named thus after the area was used as a burial ground during the 1832 cholera epidemic. The cross slab has stood majesticaly overlooking the Moray Firth for over 1,000 years. It is now encased
in glass for protection against the elements.

From Balintore drive south along the coast road through Shandwick and you will see the stone in a field adjacent to the road just outside Shandwick. Parking is in the lay-by next to the stone. 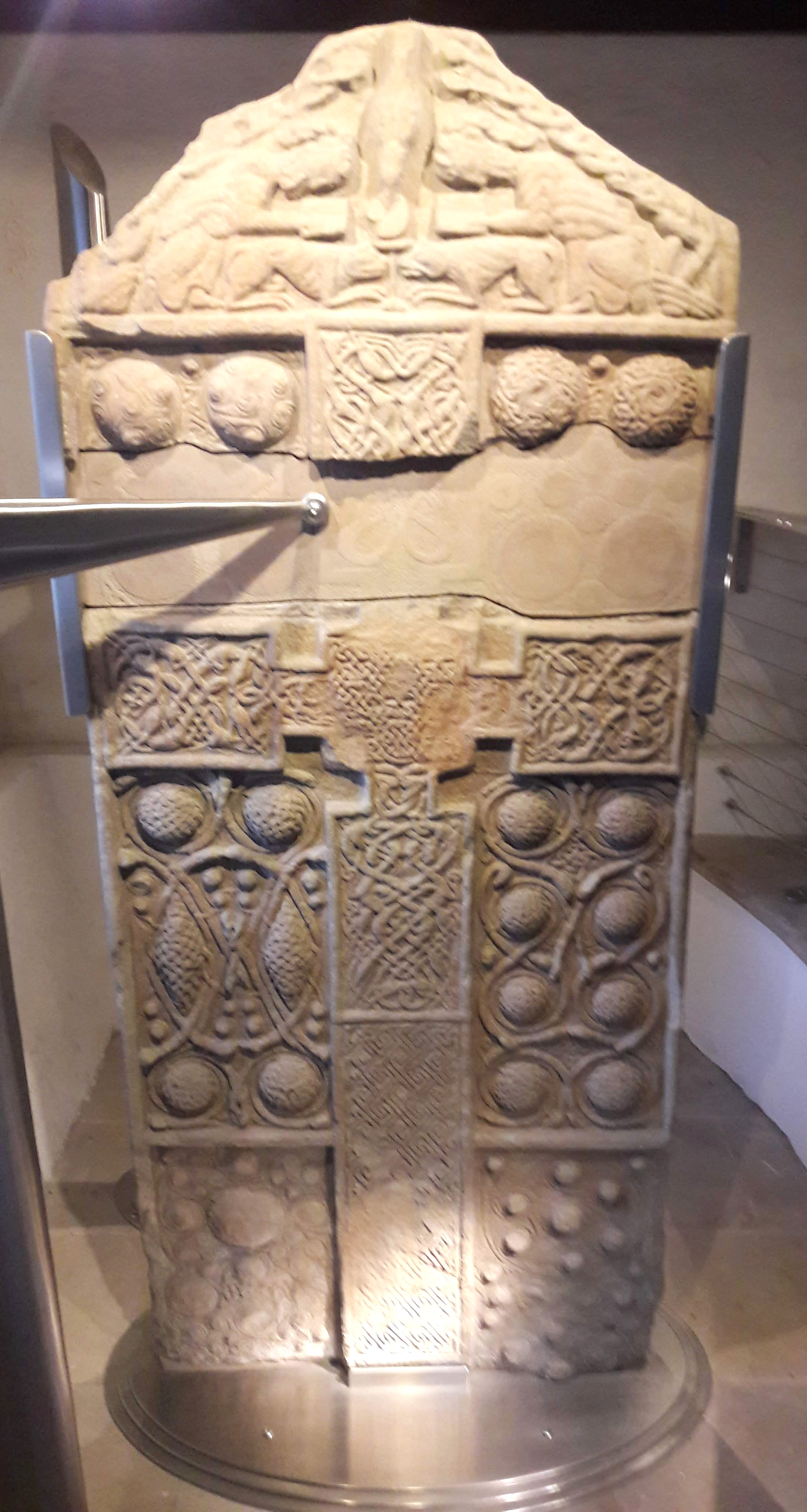 The Nigg Stone is displayed inside Nigg Old Church.

Admired and studied by scholars all over the world, its ornamental cross resembles a manuscript page. The fantastic intricacy of the carving, the whirlpools of spirals, and the heaped up knot of snakes, with tails and tongues endlessly intertwining, is only paralleled in the illuminations of the great Gospel-Book of Kells.

The carvings include a unique illustration of a miracle, the first monks, Paul and Anthony, receiving bread in the desert from a raven sent by God: and David, King and Psalmist, saving a sheep from a lion, his harp beside his shoulder.