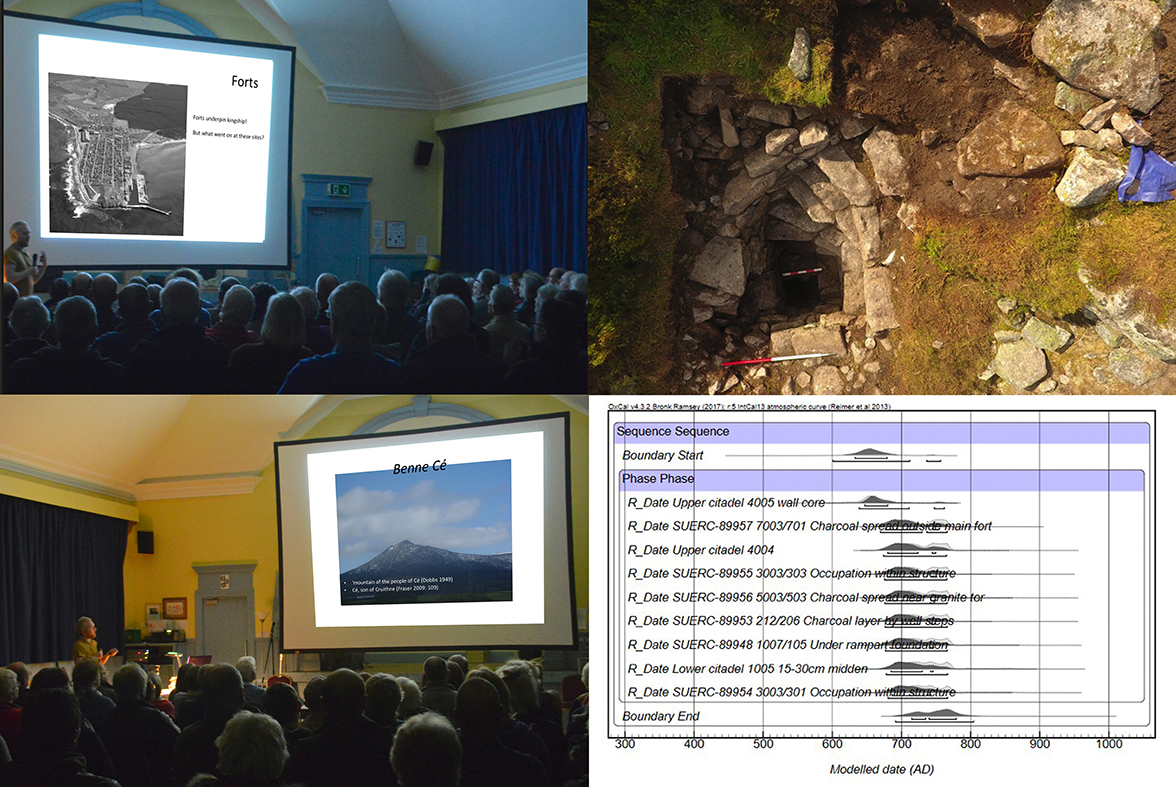 The speaker was Professor Gordon Noble, Head of the Department of Archaeology at Aberdeen University. He is valued supporter of the Centre.

It is fitting to record the support given over the last 7 years by the University as part of The Northern Picts Project. Following on from York University’s original Discovery Programme, Northern Picts is a project that aims to uncover the archaeological traces of Pictish society in eastern and northern Scotland during the early medieval period c400-900 AD. The Picts are a ‘lost people of Europe’ and of enduring public fascination. The major legacies of the Picts include some of the most spectacular archaeological sites and artistic achievements of Early Medieval European society. The project to date has had some spectacular successes and which are summarised on the Northern Picts website (Links below).

The most recent book from the project is ‘The King in the North. The Pictish Realms of Fortriu and Cé.’ by Gordon Noble and Nicholas Evans. This is a highly affordable and readable book which pulls together there searches of the Northern Picts Project during 2012-2017. Generously, the Centre gains the sales benefits from the book.

Professor Noble’s topic on the night ‘The King in the North. The latest progress on the Northern Picts Project’ updated us, covering excavation work done in 2018 and 2019. Hill forts are indicative of the centres of power. One site is the hill fort on MitherTap, the summit of Bennachie,the iconic hill of the Aberdeenshire landscape. An early name given was BenneCé. Cé is the name of the north eastern kingdom of Pictland. Light bulb moment.The research on place names and recorded king lists have all played a part in the unfolding story of where power lay in Pictish society. Bennachie may thus have been one of the pre-eminent sites in this region of Pictland. Carbon dating has confirmed the periods of occupation of these hill forts. Mither Tap was occupied from approximately 620AD to 800 AD.

Another site revisited in 2018 was Burghead, the largest known Pictish fort to date and another key royal centre in Northern Pictland. It was thought much of the site had been destroyed by harbour development in the 1800s, but once the rubble had been cleared away, the earlier remains were revealed, a significant one being a possible Pictish longhouse, as very little is currently known about Pictish domestic living and architecture. Carbon dating of deposits and charred layer had revealed an extended occupation period from about 500 to its sudden destruction in 1000AD, during the Viking age. The fort’s ancient ramparts are now under threat from coastal erosion, which lent a degree of urgency to the need for further excavation.

In conclusion, this was a talk brimming with snippets big and small of fascinating finds and information. Through painstaking and thorough research, the once forgotten story, or perhaps more accurately the un-written story of the Picts continues to be revealed. What more will 2020 reveal?

Afterwards, Pat Rae a Trustee of the Tarbat Discovery Centre and responsible for promoting academic ties, said, ‘Over the last decade, Tarbat Discovery Centre has a great many things to thank Aberdeen University for, and Gordon Noble especially. Thanks too must go to our former Chairman Tony Watson, who had helped to initiate the Northern Picts Project back in 2000. He concluded the evening with an eloquent overview of the many forms of support given such as further local excavations, annual talks and displays of the findings, key booklets for sale at the Centre, and joint with University of York, an excellent introductory video for visitors.

‘Northern Picts continues to be an inspired programme of funding that has given added value all round, not only to the University and its staff and students but links so effectively to the local communities.