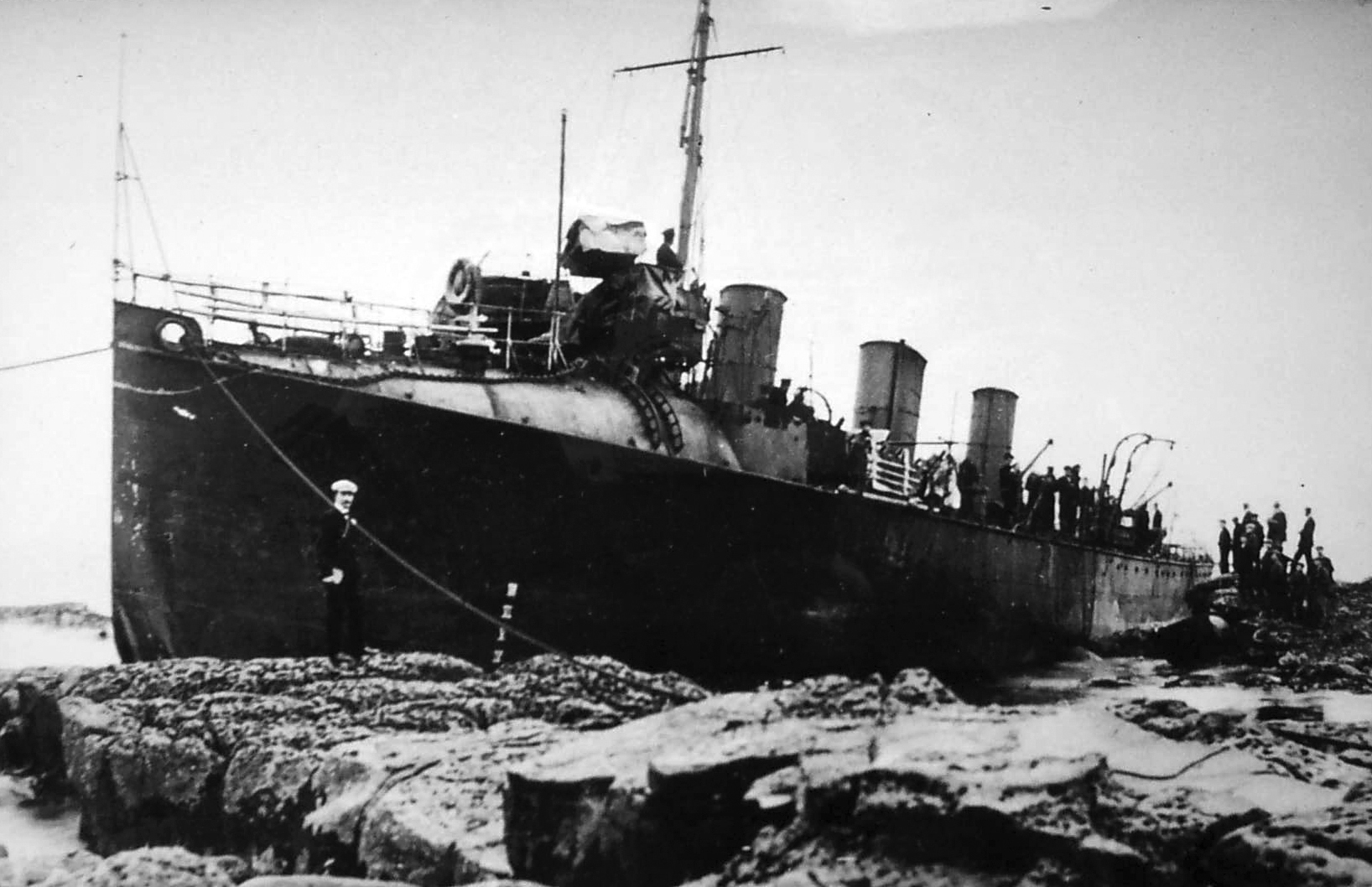 Ship on the Rocks

HMS Fawn went aground on the rocks by Tarbatness Lighthouse in 1907. She was later re floated a high tide.

This photograph was taken by Dan Mitchell uncle of Stan Mitchell who has the photo. He had the first camera in Rockfield and was taught to use it by D. J. Ross who had a grocers shop in the Port (Portmahomack).

To enable the vessel to re float it was decided to make it lighter by off loading the coal (used for the boilers – the ship was built in pre oil fired days). Local fishermen were tasked with going to the ship and taking coal on-board. This was then taken to local villages and off loaded. It was then distributed amongst the local households.

HMS Fawn was a Palmer three funnel, 30 knot destroyer ordered by the Royal Navy under the 1896 – 1897 Naval Estimates. She was the fourth ship to carry this name.

Fawn was laid down on 5 September 1896 at the Palmer shipyard at Jarrow-on-Tyne and launched on 13 April 1897. During her builder’s trials she made her contracted speed requirement. She was completed and accepted by the Royal Navy in December 1898.

Fawn was commissioned at Portsmouth 27 August 1901 by Lieutenant and Commander J. A. Ingles and assigned to the Channel Fleet.[5] She spent her early operational career in Home Waters operating with the Channel Fleet as part of the Portsmouth Flotilla. On 2 April 1902 she was commissioned to relieve the destroyer Hardy at the Mediterranean station,[6] under the command of Lieutenant Robert W. Myburgh.[7] She returned to Home Waters in 1906.

On 30 August 1912 the Admiralty directed all destroyer classes were to be designated by alpha characters starting with the letter ‘A’. Since her design speed was 30-knots and she had three funnels she was assigned to the C class. After 30 September 1913, she was known as a C-class destroyer and had the letter ‘C’ painted on the hull below the bridge area and on either the fore or aft funnel.

In July 1914 Fawn was deployed in the 6th Destroyer Flotilla based at Dover. In November 1916 she was transferred to the 7th Flotilla on the Humber River. During her deployment there she was involved in anti-submarine and counter-mining patrols. In 1919 Fawn was paid off and laid-up in reserve awaiting disposal. She was sold on 23 July 1919 to Thomas W. Ward of Sheffield for breaking at New Holland, Lincolnshire, on the Humber Estuary. She was awarded the Battle Honour Belgian Coast 1914 – 18 for her service.