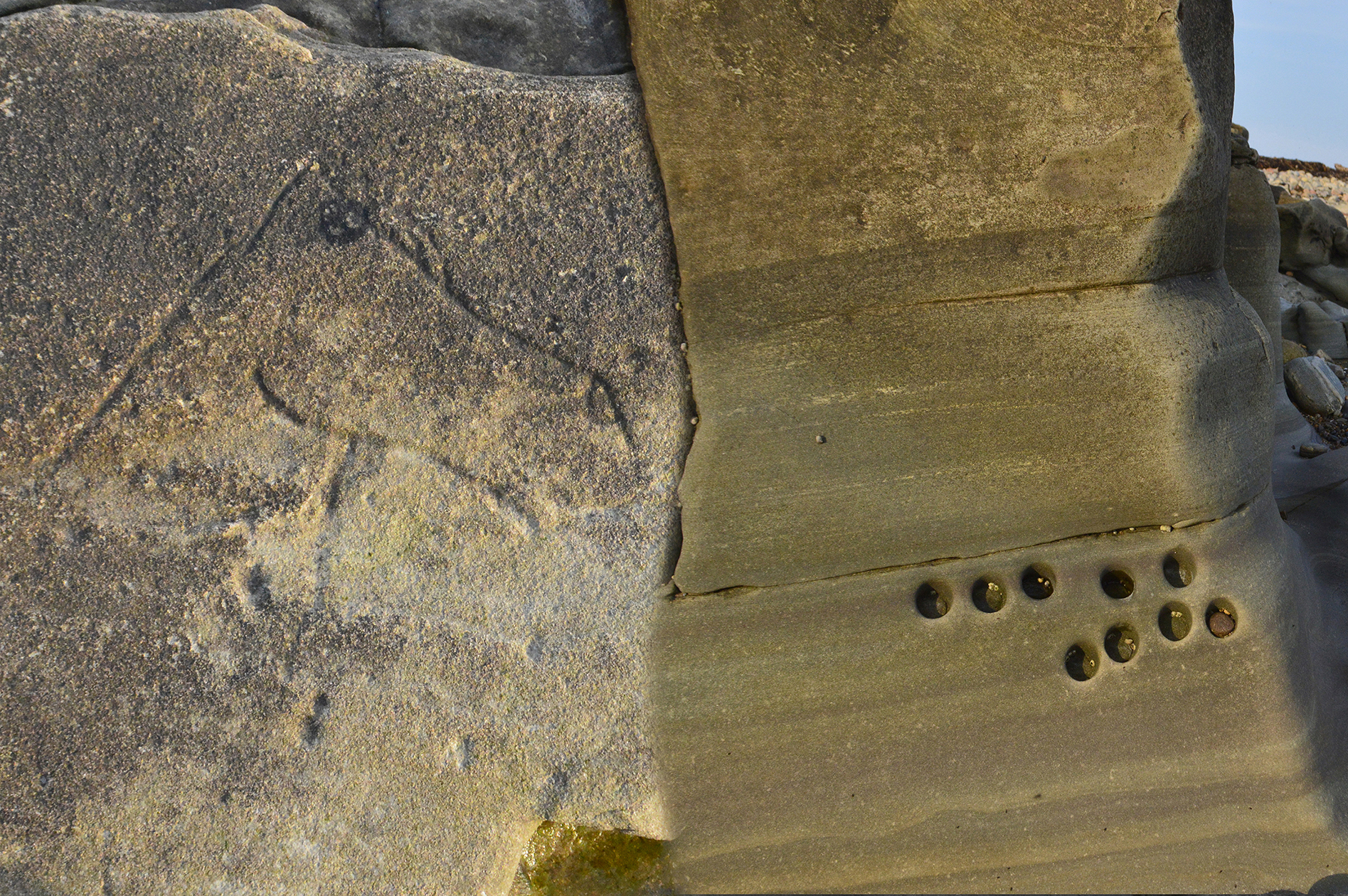 Lying hidden and largely unknown, un-noticed by walkers and visitors on the rocky foreshore of a beach near the village of Hilton-of-Cadboll, is a beautiful piece of ‘Pictish’ art in the form of a sinuous horse’s head.

Located just above the tide line at a beach, known locally as The Porscht (meaning a landing place for boats) about ½ a mile north of the village, the incised picture is missed by all but a few people who know of its whereabouts or the lucky few who leave the coastal path to Rockfield and decide to explore the foreshore.

The incised picture depicts the head and neck of a horse with delicate details such as the ear, forelock, nostril and mouth. Whilst the form of the horse was described by Professor George Henderson as typically Pictish in form, it has been impossible to actually give a date to the carving.

The stone certainly outdates local memory, there are no stories of it being carved, it just seems that it has ‘always been there’. The question ‘why is it there?’, is also relevant. Add to the fact that the ‘horse’s head’, being just ½ a mile north of the village of Hilton-of-Cadboll, is therefore close to the site of Our Lady’s Chapel and the site of the Hilton Stone. It’s locality therefore would seem to tie it to the local Pictish landscape.

It was thought that the rock used to carve the Hilton-of-Cadboll stone came from across the firth in Morayshire. However recent tests on the stone have been able to locate its origin much closer to home. Indeed it was quarried from the bedrock in the foreshore of The Porscht, alongside where the horse’s head was incised! This could be the answer to when the carving was made.

Imagine that you live about 800 CE, some 1,200 years ago and you are selecting stone for a monumental sculpture, would you not test the quality of the stone before you went to all the trouble of excavating the rock? And what simpler way of doing so than to try out its suitability by actually making a small incised picture on the visible surface of some rock next to where you planned to do the excavation?

So does this explain why the enigmatic horse’s head carving it on the rocks at ‘The Porscht’? It is easy to imagine that all of those hundreds of years ago a Pictish sculptor crouched over the rock and delicately tapped away with his hammer and chisel on the rock. Having done so he sat back, admired the horse’s head he had just carved and then gave the ‘thumbs up’ to his team of workers who then began the labour of taking out the block of rock that became the famous Hilton-of-Cadboll Stone.

So, what do you think? Why not visit and take a look for yourself?

On the lower seaward side of the rock on which the Horse’s Head is incised are a series of round holes.

They are all the same diameter and are obviously not naturally occurring features.

What are they? Why are they there? Could they be holes that were bored into the rock in the process of quarrying a slab of stone?